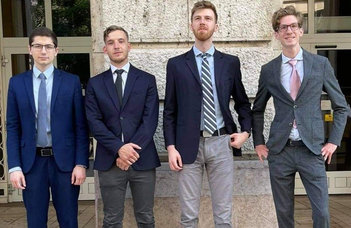 ELTE law students have won the Herbert Smith Freehills Competition, a prestigious international law competition, before runner-up team from the National University of Singapore and before the host team from King’s College London

The lawsuit from November 2020, dealt with the abuse of economic dominance by the players of the AppStore digital market and is similar to several ongoing proceedings investigating Apple’s abuse of its dominant position in the digital music industry.

From the first (written) round, the jury invited 12 teams (from the 39 teams) to the next round. ELTE’s team defeated the University of Oxford, the team of King’s College London and the team of Symbiosis Law School Pune (India) in the online competition held on 18 - 19 June, and then the National University of Singapore in the finals.

ELTE was represented at the competition by Andor Cserép, Kristóf Csillik, Balázs Dániel Schultz and Lóránt Teleki, law students, and by Mónika Papp, Assistant Professor at Department of Private International Law and European Economic Law and Bálint Bassola, lawyer, who helped in the preparation of the students.