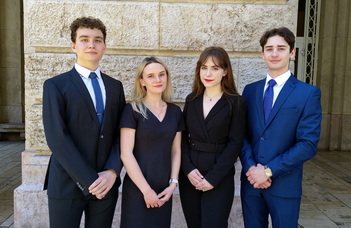 The student team of the ELTE Faculty of Law bested the teams of 35 universities and received the Max Huber Award for Highest Overall Score, as well.

The ELTE Telders Team taking on the role of the defendant, not only outperformed their opponent, the team of the University of Leiden, the winner of the oral round on 11 June, but also finished in first place overall: the four students of law won both major prizes in the well-established Telders International Law Moot Court Competition, organised for the 45th time this year.

This year’s legal case was concerned with a dispute between Jonam and Maleen, two fictitious tropical states. In 2013, Maleen, one of the world’s fastest-growing economies, launched a low-budget satellite to orbit Mars. Subsequently, in late 2021, they decided to transform it into a satellite orbiting the Earth in an extremely innovative – yet rather hazardous way – with the contribution of astronauts from the International Space Station.

During the refurbishment, space debris collided with Maleen’s satellite due to a space operation carried out by Jonam, which led to the failure and explosion of the satellite a few days after the transformation. The pieces of the satellite fell into Jonam’s territory, which led to the loss of human life and caused severe environmental damage in a rainforest. The states are now mutually claiming damages against each other, Maleen for the loss of its satellite and Jonam for damage caused to its territory.

In its first judgment, the International Court of Justice finds that international space law has been violated by both states. Then the part of the case focusing on reparations and compensation commences. The aim is to precisely determine the extent of liabilities to the parties and to decide on the amounts of compensation due by each party. Competitors, therefore, had to propose methods to determine the value of human lives and health, protected fauna species, a temple representing a great value of cultural heritage, and an innovative satellite, and argue for each method on behalf of the two states.

In 2019, the student team of the ELTE Faculty of Law got in the finals held in The Hague for the first time and could at once step on the top of the podium.

The competitors were again supported by Hegymegi-Barakonyi and Partner Baker & McKenzie Law Office and the Ministry of Justice.