Leaders of the Faculty
Departments

Leaders of the Faculty

A Brief History of the Faculty 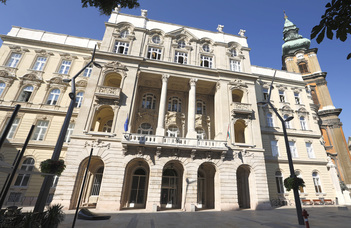 It has been more than 350 years since on 2 January 1667 – on the basis of the last will and donation of Imre Lósy and György Lippay, archbishops of Esztergom – our Faculty was established as the first law faculty in this country which has been continually operating ever since.

The Faculty was established in Nagyszombat (now in Slovakia, called Trnava), in the northern part of the historical Hungary; it was moved first to Buda (in 1777), then to Pest (in 1783). The Faculty saw the recapture of Buda from the Turks (in 1686), Rákóczi’s war of independence (between 1703 – 1711) and the work of the great personalities of the Hungarian reform era (between 1825 – 1848); its law students participated in the fights of the revolution and war of independence in 1848/49 as well as in the revolution in 1956.

At the time of the Faculty’s creation, Hungary was still part of the Habsburg Empire, then it lived to see the independence of Hungary, the devastations of World Wars and dictatorships and in the last decades the law of the European Union has been taught at the Faculty to Hungarian and foreign students.

As part of the University, it is one of the oldest public institutions of the country. Its operation spans over eras and state borders. Its international relations have been highly significant for centuries with special regard to French, German and Italian speaking countries and at the moment, it cooperates with more than 110 foreign law faculties in the framework of the Erasmus programme of the European Union.

Professors and members of the Hungarian Academy of Sciences, having an impact even on today’s legal science, were teaching here. Thanks to their work, an institution of European significance and quality emerged from a smaller faculty during the second half of the 19th century which has retained its position as the leading law faculty of the country in the 20th century and even today.

Over centuries, students prepared for classical legal careers in this country exclusively at our Faculty. The elite of the judges, attorneys and prosecutors as well as that of the public administration and politics came from here. Several students of the Faculty became later politicians and were appointed as ministers, prime ministers and two of the professors of the Faculty (Ferenc Mádl and László Sólyom) were appointed as presidents of Hungary.

In 2006 the Faculty was named a Place of Excellence in recognition of its outstanding results in higher education. Our Faculty maintains wide-ranging international relations primarily with universities in Europe and we are also involved in educational and research projects with similar institutions. We launched Hungary’s first LL.M. programme (in European and International Business Law) in 2013. Our students are regularly ranked among the top in national and international legal competitions, even triumphinng in prestigeous international competitions like the Philip C. Jessup International Law Moot Court Competition or the Telders European Moot Court Competition.

Integrating research and education into the European Higher education Area and fostering international educational ties are our main intentions in the future. Therefore we wish to expand our international ties in research, education and student exchange not only in Europe but overseas as well. For this purpose there are already a great number of courses and educational programmes in foreign languages available at our Faculty, some even involve outstanding instructors from abroad.